Technical Entrepreneurial and Vocational Education and Training Authority (TEVETA) has applauded Catholic Women Organization (CWO) in the Archdiocese of Blantyre for empowering women through vocational skills.

Speaking at the official opening of a workshop for training of the trainers held at Limbe Cathedral, Southern Regional Service Center Manager for TEVETA, Victor Luwambala applauded CWO for complementing government efforts in empowering people of this country.

Members of the Association of Catholic Journalists (ACJ) in Malawi are scheduled to hold an Annual General Meeting (AGM) at Limbe Cathedral in the Archdiocese of Blantyre .

Organizers of the AGM have confirmed that preparations to host Catholic Journalists in Malawi from 9th August to 11th August this year are underway. In an announcement being aired in some Catholic Radios, the organisers invite all Catholic Journalists to attend this elective AGM. In the same message a request is also made to all well wishers to assist the Association with funds to meet the costs of the AGM.

Catholics in the Archdiocese of Blantyre, Thursday gathered at Limbe Cathedral to pay their last respects to the late Fr. Dasiano Muhime who died on Tuesday.

Fr. Muhime, who until his death was curate priest at Limbe Cathedral parish, died after a long illness at Adventist hospital in the commercial city of Blantyre,.

In his eulogy during Eucharistic celebration, Archbishop Thomas Luke Msusa of archdiocese of Blantyre thanked God for the life of Fr. Muhime who has served as priest for five decades.

The Archbishop also thanked relatives of Fr. Muhime for allowing him to serve God as a Catholic priest in the archdiocese. 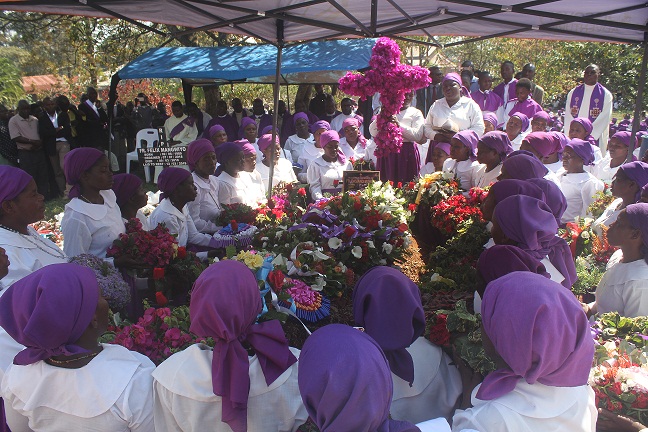 Catholic women at the graveyard of late Father Muhime

Concurring with the Archbishop, Representative of Association of Diocesan Clergy of Archdiocese of Blantyre (ADCAB), Fr. Elizeo Nthalika expressed gratitude to Catholic Christians for taking good care of the late priest in all the parishes he has served.

Nthalika further urged his fellow priests to remember that God is always with them in their priestly ministry.

He was ordained Catholic priest on 23 August, 1969 at Limbe cathedral by late His grace James Chiona.

Recalling the phrase Jesus told his disciples: “I send you out as sheep in the midst of wolves” (Mt 10:16), Archbishop Thomas Msusa urged the new priests to shine amid a

society where darkness and hostility against God abounds.

His Grace presided the priestly ordination at the Limbe Cathedral on Saturday in Blantyre.