“DO NOT JUDGE OTHERS”

Catholic Archbishop of the Archdiocese of Blantyre, His Grace Thomas Luke Msusa has urged members of the public to stop judging others through mob justice.

Archbishop Msusa’s sentiments follow the killing of two men at Chawe area under Traditional Authority Dambe in Neno district who were suspected to have been responsible for the death of a young boy through witchcraft. The two were mercilessly hacked to death last week with panga knives following the death of the boy who was beaten by a snake.

During a special Eucharistic Celebration at Neno Catholic Parish on Wednesday 6th November, the Catholic leader urged citizens to resist mob justice meted on people suspected to have broken the law. He explained that any act of killing goes contrary to Ten Commandments that God gave to people through Moses at Mount Sinai. 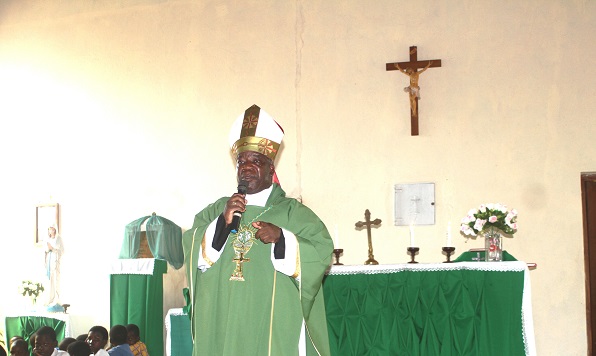 “Before they are brought before the court, before their side of the story is being heard they are being killed, this is shameful act. These killings have tarnished the image of our country, in particular Archdiocese of Blantyre” said Archbishop Msusa.

He then urged Traditional Leaders to be agents of peace in the country by condemning acts of killing people suspected to have committed crimes.

The Catholic leader in the Archdiocese of Blantyre also urged parents to stop forcing young girls into marriage saying they must remain in schools for them to develop Malawi.

After the Holy Mass, Archbishop Thomas Luke Msusa officially opened a Paralegal clinic at the Parish under the Catholic Commission for Justice and Peace (CCJP). Among others, the clinic is expected to bring awareness to people in the district in curbing mob justice to suspects. It is also expected to handle gender based violence and ease pressure in traditional courts and magistrates.

Archbishop Msusa has since commended CCJP for the clinic as it is one way of helping people access justice. The Clinic in Neno adds up to seven CCJP legal clinics under the Archdiocese of Blantyre.

From April this year, Neno district has recorded five killings of people suspected to be practicing witchcraft.