Recalling the phrase Jesus told his disciples: “I send you out as sheep in the midst of wolves” (Mt 10:16), Archbishop Thomas Msusa urged the new priests to shine amid a

society where darkness and hostility against God abounds.

His Grace presided the priestly ordination at the Limbe Cathedral on Saturday in Blantyre.

The new priests were accompanied by their families and dozens of people from the parishes where they served as deacons throughout the year were also present.

The environment of the sunny spring morning was a joyful, prayerful one. 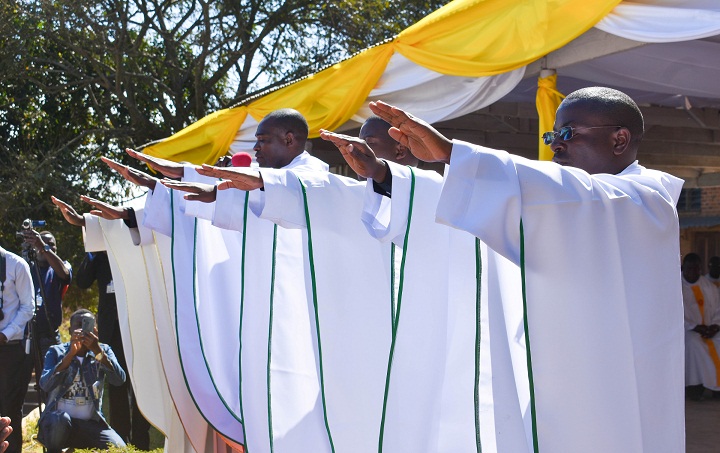 “A young priest can only bring the light of Christ to a confused society through faith and hope in Jesus. Open your heart to him, for it is he, and he alone, who gives life,” Archbishop Msusa said during his

homily. “You are going into a world that has abandoned God and wants nothing to do with God.”

fear prevent you from proclaiming the truth.”

Thereafter, he invited all of those present to pray for the five new priests: “That they may be faithful,

virtuous, holy men, whose hearts are formed by Christ.”

The archbishop asked parents to “be willing to offer your sons to Christ if He calls them. Never ever discourage a young man from the priesthood.” He also insisted: “Pray that the Lord may plant in the heart of young men the seed of the vocation of the priesthood, and he will provide them the grace and the fortitude to say ‘yes’ to that vocation no matter the cost.”

Archbishop Msusa also gave them some recommendations to help them grow in fidelity to their priestly vocation. He assured them that the most important point is an “intimacy with Jesus,” which would make them “men of virtue and holiness.”

He also invited them to be “men of prayer,” which does not mean that “you hide away in the chapel for hours a day or you spend your life in prayer,” since that is a different calling, and added: “[In your ministry] you will see as a priority to serve others for the love of Christ,” always trusting in the power and grace of God, “because it is God’s power working for you, and you must open your hearts and souls to receive that grace from God and to radically depend on him and not on yourselves.”

His Grace also reminded the newly ordained priests of their mission “to bring people to encounter Jesus Christ” — and he highlighted Pope Francis’ constant invitation “to go out into the peripheries, go out to

“These men... have heard the call to the priesthood of Jesus Christ and opened their hearts to the call,” Archbishop Msusa said. “They have received that call from the Lord. Even in these times in which we

"I call on protesters to dialogue so that each party moves forward to make good a harmful situation and seek the path for rebuilding our society. Why should you go on the streets to burn other people’s houses? Why should you go out there to steal other people’s goods in the name of demonstrations? If you want go and burn your houses or go and steal from yourself. Another bad behavior is going in the streets to butn tyres so that people should not have access to roads. Stop that behavior and let us act responsibly ," Archbishop Msusa, a mid-ululation from the congregation.